Read the latest information on the Campus Comeback plan.

Update for Academic Year 20-21: Moot Court has gone virtual! Due to the pandemic, Moot Court has shifted to a virtual platform, nationwide. See below for news and updates.

San Francisco State University and the Department of Political Science have a young, but very competitive, Moot Court Team and a Moot Court Club.

What is Moot Court?

Moot Court, a traditional law school activity now growing in the undergraduate arena, prepares students for the rigors of arguing a case before the United States Supreme Court. Moot Court is an outstanding opportunity for students to experience the practice of Constitutional Law first hand. We hope to build a program that provides not only good instruction and training for students in their future endeavors, but also to create a program that is competitive nationally. While the program has been in existence only since 2017, the students’ performance at past tournaments demonstrates we are well on our way to achieving that national standing.

How does Moot Court Work?

Moot Court is an academic competition in which students engage in legal/appellate advocacy before a fictional United States Supreme Court. Each team consists of two SF State students who argue one constitutional issue apiece. In 2018 the American American Moot Court Association (AMCA) “case problem” consisted of a fact-pattern involving the 14th Amendment right to Equal Protection and 1st Amendment right to Freedom of Expression (specifically, Affirmative Action and Employee Speech). Team members prepare “argument outlines” to serve as assistive aids during the competition, which include detailed legal analysis of the applicable controlling law on these constitutional issues.

During the competition, students present oral argument to a panel of judges who evaluate their performance, both on legal substance and oratorical skill. Students must present arguments at least three times, and must argue both sides of the case during the preliminary rounds of the tournament. 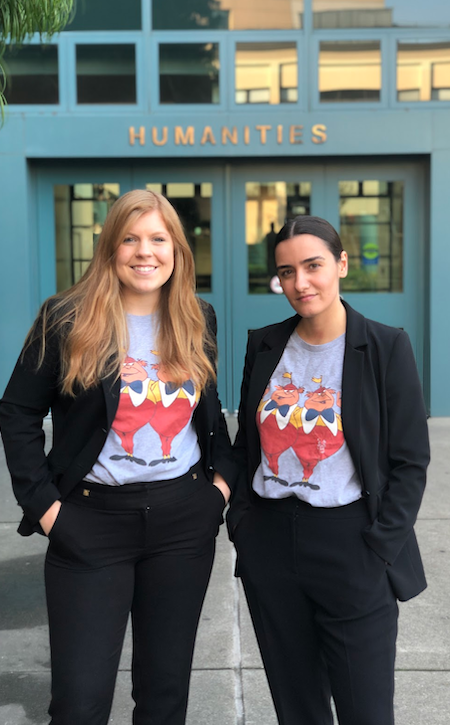 What is your favorite part about moot court and how has it impacted your time at San Francisco State?

“Critical reading and writing are something I have really perfected in my time in Moot Court. Being able to read something and pick up on little details to utilize in my writing has made me a better student all around.” - Abigail Richards

“Acquiring the ability to speak in front of multiple people has helped my public speaking confidence tremendously. Additionally, my writing proficiency has increased dramatically in preparation for law school.” - Devon Montes

“Moot Court has allowed me to see the substantive arguments on both sides of a topic about which I care a great deal. Apart from allowing me to consider difficult cases from opposing points of view, the experience of arguing your case to a panel of judges will undoubtedly prove to be a crucial component in my future success.” - Liam Sidebottom

“Moot Court has expanded not only my critical reading skills but has also helped cultivate the ability to formulate arguments for both sides of a salient issue. It forces you to not only intimately understand both sides of an issue but requires you to construct arguments that must stand up to the analysis of others.” - Owen Nelson

“Moot Court has taught me to see both sides of a given issue. I am able to clearly articulate the law, make an argument, and advocate in front of a panel of judges. But more importantly, moot court has given me lifelong friends and a coach, who play a tremendous role not only in my education but my path to law school, which I am forever grateful for.” - Yana Gagloeva

2020 National Tournament: SFSU team (Owen Nelson and Aaron Gamez) were in the final 32.