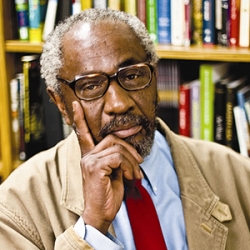 Robert C. Smith is professor of political science at San Francisco State University.  An honors graduate of the University of California, Berkeley, he holds a master’s degree from UCLA and the Ph.D. from Howard. He is author or co-author of scores of articles and essays and ten books including Race, Class and Culture: A Study in Afro-American Mass Opinion; Racism in the Post-Civil Rights Era: Now You See It, Now You Don’t; We Have No Leaders: African Americans in the Post-Civil Rights Era; African American Leadership; Contemporary Controversies and the American Racial Divide; Conservatism and Racism and Why in America They Are the Same, John F. Kennedy, Barack Obama and the Politics of Ethnic Incorporation and Avoidance, What has This Got to Do With the Liberation of Black People?: The Impact of Ronald W. Walters on African American Thought and Leadership and Polarization and the Presidency: From FDR to Barack Obama. He is former associate editor of the National Political Science Review and general editor of the State University of New York Press African American Studies series. He has taught African American politics and American government for more than thirty-five years.

In 1998 he was recipient of Howard University’s Distinguished Ph.D. Alumni Award.